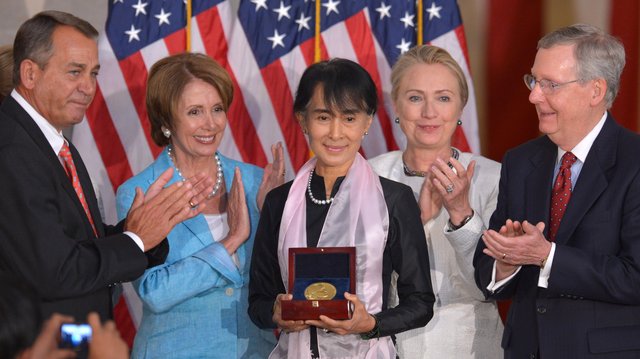 Ms Suu Kyi, on a coast-to-coast US tour, held private talks with Mr Obama in the Oval Office after being feted by politicians in the Capitol.

She was presented with the Congressional Gold Medal for her long fight for democracy in a country ruled by army generals since 1962.

"This is one of the most moving days of my life, to be here in a house undivided, a house joined together to welcome a stranger from a distant land," she said.

"Among all these faces are some I saw while I was under house arrest, and some I saw after I was released from house arrest," said Ms Suu Kyi, acknowledging strong support from US lawmakers during her 17 years of house arrest.

The Oval Office setting for the first meeting between the two Nobel Peace laureates afforded Ms Suu Kyi's visit some of the trappings normally reserved for visiting foreign presidents and prime ministers.

News photographers were allowed in briefly but not television cameras or print reporters. Mr Obama and Ms Suu Kyi met for about half an hour.

Mr Obama, seeking re-election in November, seized the chance to meet Ms Suu Kyi on the second day of her US tour.

The encounter could help him highlight what many see as a foreign policy accomplishment of his administration in helping to push Burma's generals onto the path of democratic change.

The president expressed his admiration for Ms Suu Kyi's courage and personal sacrifice in championing democracy and human rights over the years, the White House said in a statement after the meeting.

Aung San Suu Kyi, Nobel Peace Prize winner, leader of the opposition National League for Democracy (NLD) party and Burma's democracy icon, spent 15 years under house arrest in her lakeside home and Insein prison. First detained in July 1989 for six years, she was put back under house arrest again from 1999 to 2002 and then finally again in May 2003 after the infamous Depayin incident, in which the military regime attempted to assassinate her. She was released from her latest sentence in November 2010 and continues to work tirelessly to achieve democracy and national reconciliation in Burma in spite of constant threats and oppression from the authorities. In this photo, written on her hand is the name of Soe Min Min, an NLD member who was arrested in 2008 and sentenced to eight years for praying for Suu Kyi's release while she was under house arrest. He was released from Insein prison under a presidential amnesty in January 2012.

Burma at a Glance

How do you say our House Founder's name, Aung San Suu Kyi?

“Aung” is roughly pronounced “Oun” (rhymes with “sound,” without the ‘d’ and ‘s’). Most Burmese people with the name ‘Aung’ spell it misleadingly with ‘ng’ because in Burmese, it is spelled with a silent ‘ng.’ “San” is pronounced close enough, but to be more exact, it has to be lengthened (so more “Saan” rather than “San”.) “Suu,” unlike the misleading lengthening of the vowel, is short and abrupt. So it’s more of a a snappy and quick “Su” rather than a long-voweled “Suu.” And “Kyi” is the one most people have trouble with. The pronunciation of “Kyi” does not even exist in English, so a “Chee” is the closest approximation. But for those who are familiar with Spanish or French, the ‘k’s in those languages are softened. But the “Kyi” is a combination of the soft ‘k’ and a ‘y’ sound, which is hard to explain.

apyet asin pyin khana
An error may go on endlessly, but can be remedied in a moment.