Were Early Humans Cooking Their Food a Million Years Ago? 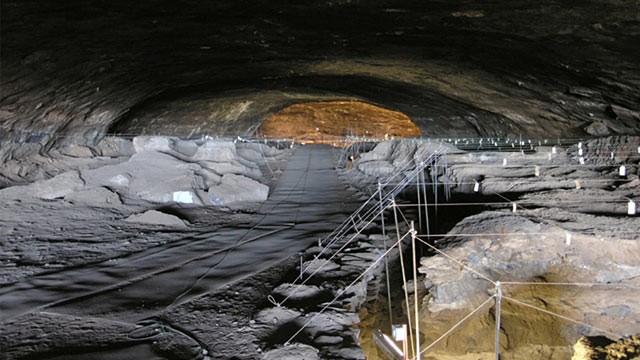 The inside of Wonderwerk cave in South Africa is shown in this undated photo. (Courtesy Michael Chazen/AP Photo)

Early humans harnessed fire as early as a million years ago, much earlier than previously thought, suggests evidence unearthed in a cave in South Africa.

Charred bones and ash discovered in South Africa's Wonderwerk Cave indicate the presence of frequent, controlled fires at the site one million years ago, writes an international team of scientists in a study published Monday in the Procedings of the National Academy of Sciences. If these findings are correct, they will overtake the earliest widely accepted evidence of early human use of fire, which was discovered in northern China and dates to 400,000 years ago.

Those fires, as well as the fires in Wonderwerk Cave, were probably burned by Homo erectus, a species thought to be a human ancestor or a relative of one. The cave itself is one of the oldest known sites of human habitation, with signs of early human settlement dating back two million years.

Unambiguous evidence for controlled fires is notoriously hard to come by. Outdoor sites are dubious, as they could have been natural blazes sparked by lightning. Even sites inside caves can be suspect, as ash and other burnt materials can be blown or washed in from elsewhere. The scientists working at Wonderwerk Cave examined the ash, which was found some 100 feet from the cave's entrance, under a microscope. The pieces of ash still had jagged edges, which would have likely been smoothed out had they been carried by wind or water from outside the cave.

According to Nature, the scientists even searched the site for bat feces, "because large piles of rotting guano can become hot enough to ignite spontaneously." But fortunately for the researchers, that layer of sediment was bat-excrement free.

As for the charred bones, the Los Angeles Times's Amina Khan notes that it's difficult to determine if a million-year-old bone appears charred because it was heated or because it has fossilized. So the researchers examined the bone fragments under a microscope.

Bones are filled with a mineral called hydroxylapatite, which gives them their strength. It forms in tiny plate-like crystals that slowly fuse together as an old bone is fossilized. When a bone is heated to high temperatures, however, the crystals change shape, growing into large needles rather than small plates.

The researchers found that the bone fragments indeed contained the large-needled crystals rather than the more conventional plate-like patterns. Based on their analysis, the bones had to have been heated to more than 750 degrees Fahrenheit.

If it's hard to identify signs of a controlled fire, it's even trickier to determine if humans used it for cooking. After all, the bones could have simply been tossed into the fire after being stripped of raw meat.

And although the depth of the sediment suggests that fires burned on the same spot over and over again, the researchers found no signs of a stone hearth – a sure sign of deliberate fire – anywhere near the spot.

All of this points to the important distinction between using fire and mastering it. Nature quotes Wil Roebroeks, an archaeologist at Leiden University in the Netherlands.

"I think it likely that humans were using fire at this site, but I don't think that this means these hominins were regular fire users. For a claim like that to be made, we would need to see hearths and fire places, and we do not," he says. "If we were to discover many more fire sites at this time in history and find that natural cave fires look distinctly different, that would support an early-cooking hypothesis, but we are not there yet."

Digging for the Truth: The Iceman Cometh (2005)