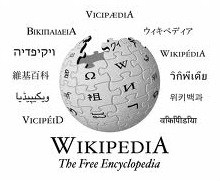 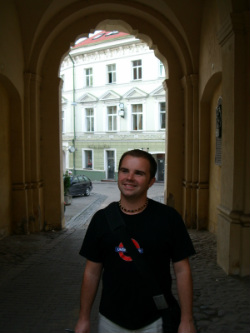 Mr. Hendricks in Vilnius, Lithiania (2006).
Mr. Lee John Hendricks, (born 30 July, 1979) is a social studies teacher, Student Council Advisor, and Elemiddle Principal currently working at ES International School, which works in conjunction with Academia Sánchez-Casal.  He has worked there since 2007. He is most known for his unique teaching style and enormous amounts of enthusiasm.

Mr. Hendricks was born in Southend-on-Sea, a seaside resort in Essex, England. He grew up there for ten years before leaving for the United States. He grew up in Idaho in the nineties as a teenager.

In 1998, he went to Alaska to study at the University of Alaska Fairbanks (UAF). There, he studied history, worked in a bookstore, and was a college radio DJ for most of his time in Alaska.

After graduating in history, Mr. Hendricks moved to France where he was a teaching assistant in Douai, a small town in the North of France. Later he travelled for a summer to Spain, fell in love with the country, and made himself a new home. He has lived in Barcelona for seven years.

Mr. Hendricks has had many various jobs in his life. He has been a journalist, a book clerk, a scriptwriter for a documentary company, a kindergarten teacher, and currently is a social studies teacher and Elemiddle Principal at ES International School. He is currently (and slowly) writing two books.

Mr. Hendricks has traveled extensively over his life, exploring Canada, England, Ireland, Belgium, France, Switzerland, Spain, Portugal, Morocco, Tunisia, Italy, Germany, Poland, Czech Republic, Estonia, Latvia, and Lithuania. He has visited almost all of the 50 states in the U.S., and has traveled to Benin and Togo in West Africa.

His future traveling plans are to visit many other countries, including Greece, India, Turkey, Iran, Norway, Yemen, Indonesia, and Australia, but not in any particular order. He dreams of visiting every country of Africa as well. Mr. Hendricks would love to take a hot-air balloon over the Serengeti. Hovercrafts are also another form of transportation he would love to experience.

Mr. Hendricks is passionate about history and learning from humanity’s mistakes. He believes that studying more about the past—the events and people both known and not well known—can help us understand who we are and ultimately where we are going.

On his free time, Mr. Hendricks loves to read, write, blog, and frequently visit documentary film festivals around Catalunya. He is also involved in humanitarian work and environmental campaigns.